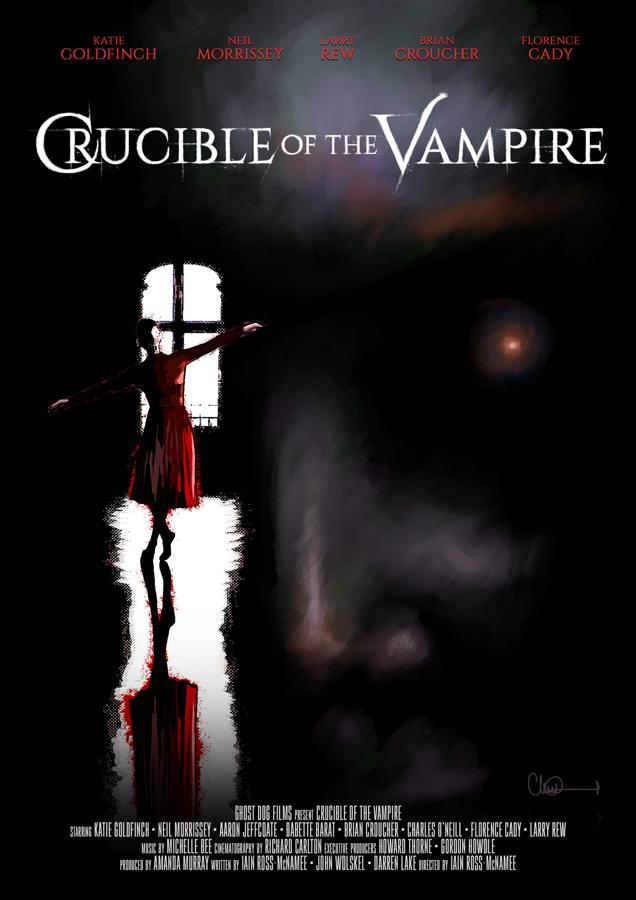 CRUCIBLE OF THE VAMPIRE is a supernatural horror film in which a woman visits a stately home to investigate an artifact. A young museum curator Isabelle (Katie Goldfinch) is sent to look at an ancient artefact, discovered in the basement of a stately home in Shropshire. Welcomed into the sprawling manor house by a seemingly hospitable family; Karl (Larry Rew), his wife Evelyn (Babette Barat) and their beautiful daughter Scarlet (Florence Cady), but all is not what it seems, as a dark and terrifying secret hangs over them. Isabelle, a young university researcher, is sent to a county manor house in rural Shropshire to verify an ancient artefact that a family has uncovered during the renovation of their home. However, the artefact has a cursed history and it soon becomes apparent that the house holds a dark secret. While Isabelle sets to work verifying the object she becomes the obsession of the owners dangerous daughter, Scarlet, and they develop a strange sexual attraction. A chance finding of a 200 year old journal confirms Isabelle's suspicions that the family are not the only residents in the house and that there is something much darker lurking within its foreboding walls. The film was shot entirely in Shropshire during 2016 and made its debut at the Berninale and Cannes (at the film market) in 2018 ** This Film also includes a Q & A after the film with director and producer ** Director(s) Iain Ross-McNamee Cast includes Neil Morrissey, Katie Goldfinch, Florence Cady, Larry Rew, Brian Croucher, Aaron Jeffcoate