The Clifton Community Arts Centre (CCAC) was established in 2013 with a view to providing arts and cultural facilities for the benefit of the community. In particular, there were attempts by CCAC to purchase or lease the old Clifton Cinema building from Dunelm, but as they were to no avail we pursued with members’ approval alternative venues in the town.

In August 2016 the HSBC Bank closed their branch at 1 Station Road, Wellington and after lengthy negotiations a lease was finally signed and now, we have Wellington Orbit. If the Clifton Cinema held iconic status in its time our current venue has no less a fascinating history going back over 300 years.

The building was in earlier times on the site of the Talbot Inn. It had been in Wellington since at least 1723 on the corner of Market Square known at the time as Market Place. It was owned by the Forester family. We have an extract of the Deeds to the property and the earliest reference is to the creation of a lease in 1774. The site of the Talbot Hotel can be seen on the map below which is dated around 1838.

The site as a whole was quite extensive going up to the bowling green.

In 1844, an open letter appeared in the Shrewsbury Chronicle stating: -

We, the undersigned inhabitants of the town and vicinity of Wellington, hereby express our cordial appreciation of the proposed line of Railway Communication from SHREWSBURY to BIRMINGHAM via WELLINGTON, SHIFFNAL, WOLVERHAMPTON, COSELEY, TIPTON, DUDLEY, OLDBURY, SMETHWICK and SOHO which has been sanctioned by the unanimous resolution of the Directors of the London and Birmingham Railway Company.

We consider that such projected Railway will be the most beneficial to the agricultural, trading, mining and manufacturing interests of Shropshire and to North Wales of any line which has yet been projected; and will also, to the traveller to the metropolis, furnish the greatest accommodation by securing to him a continuous line of Railway the whole distance under one and the same good management.

One of the signatories was an innkeeper by the name of James Griffiths who had been the innkeeper of the Talbot Hotel since 1832. A flavour of the hotel could be seen from the 1841 census that included 9 people resident including him and his wife who reportedly served “very superior dinners” with “every delicacy of the season” together with two professionals who would appear to be paying guests, and five servants including a 15 year old barmaid by the name of Elizabeth Taylor which is probably the first most oblique connection of the building to the film industry!

A prominent citizen at the time was a maltster by the name of John Slaney whose diaries survive. On 29th January 1847 he wrote:

A large Meeting at the Town Hall to day in consequence of the Railway Cos writing to remove the station from the Talbot Yard to a more distant point at the west of the Town the Meeting was very numerous for the old spot, and I seconded a Resolution to that effect, and I trust we shall succeed in our object.

It is not positively settled that the Railway is to be in the Talbot yard but I hope it is all but certain & that the approach to it will be from the front of my home.

The Railway Co have not yet finally decided as to the property to be taken down or the exact site of the Station but I believe all will be settled in a few days ..

The schedule below shows the extent of the land and its continued occupation by James Griffiths with lots 156, 157, 161 and 162 being on the other side of the railway. 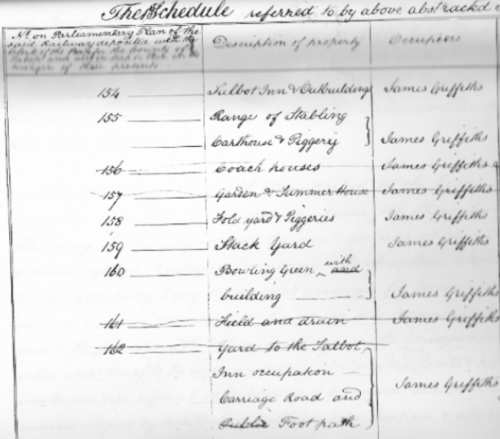 It is not clear when The Talbot Hotel actually stopped trading but in March 1848 the Shrewsbury Chronicle published the following advert by an auctioneer by the name of Mr Houlston that there would be a sale by auction on 27th, 28th and 30th March at the Talbot Hotel on the instructions of Mr Grifiths (who then moved to Vineyard Road in his retiremernt passing away in October 1856) of household furniture and numerous items of trade equipment.

The railway company didn’t really need the Talbot Hotel and the 1851 census showed it to be in the occupancy of an ironmonger by the name of Thomas Baddeley. John Slaney’s diaries indicate that the Talbot Hotel together with other surplus land was going to auction in 1852. The sale was advertised in the local press and reveals quite a lot about Wellington and the buildings at that particular time.

The property was described as having three floors with two shops on the ground floor, five sitting and bed rooms on the first floor and five bed chambers on the second floor and being about 482 square yards. The building was described as being in the best part of Wellington and ideal for the erection of refreshment rooms which Wellington was in dire need of with the increasing number of people passing to and from the ever improving railway station and for which there was no other suitable property.

The diaries show that Thomas Baddeley bought the property at the auction. However, by the early 1860’s Baddeley was in financial difficulties and by 1861 part of the premises was occupied by a tailor known as Matthew Cupit.

However, Cupit relocated in 1863 and moved down the road to the refreshment rooms for the railway and in time he became the proprietor of what is known as the Station Hotel.

Then in 1863 the Midland Banking Company (which was a predecessor to Barclays) moved into the space occupied by Cupit while Baddeley was still trading although he was declared bankrupt in 1865 and the bank may have expanded.

In 1899, the Midland Banking company relocated to what is now the offices of Parry Carver. The photograph below is believed to have been taken in around 1900 and showed what the building looked like then. 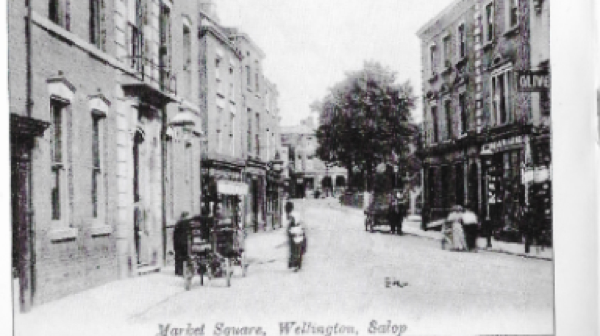 A further prominent citizen in the intervening period was another maltster by the name of James Shepard. James Shepard died in 1885 where he left his estate to his son, Harry, as a life tenant. James Shepard was a substantial property owner and his estate included a “valuable block of business premises” situated at the corner of Station Road and Market Square.

In 1901 and early 1902, Harry Shephard undertook to substantially improve the property.

On the 2nd October 1901, the North and South Wales Bank Ltd announced that a branch of that bank would be opened on completion of premises then in the course of erection and the bank was duly opened in late February 1902. This can be seen to this day from a moulding dated 1901 at the top of the building.

The bank can then be seen as it was then in the photograph below and most notably the previous right angled corner of the building was replaced by the now familiar curved corner and there was also the insertion of the distinctive tower which still exists and includes a moulding with this inscription 1901. The picture can be dated from between 1902 and 1908 as after that date the North and South Wales Bank merged with another bank to become the London City and Midland Bank (later the Midland Bank) that eventually through takeovers and mergers became part of HSBC.

After Harry Shephard died in 1917 the estate of James Shephard was put to auction in March 1918 where it could be seen that the site included not only the bank but other business premises including solicitor’s offices upstairs and a vacant lock up shop having a frontage on Station Road but more noticeably the Wellington branch of WH Smith with domestic accommodation on the two upper floors.

The picture below which is in May 1907 shows the building as it was then. This can be compared with the 1900 photograph that shows the adjoining unit as being in the name of Davies & Wilcox. This was an ironmongery business that was in business from the 1860’s originally as Benbow & Davies and later as Walter Davies.

By 1900 the Market Square property was more of a showroom with a larger premises at the corner of Walker Street and Duke Street that continued to trade until the early 1970’s from that other premises. 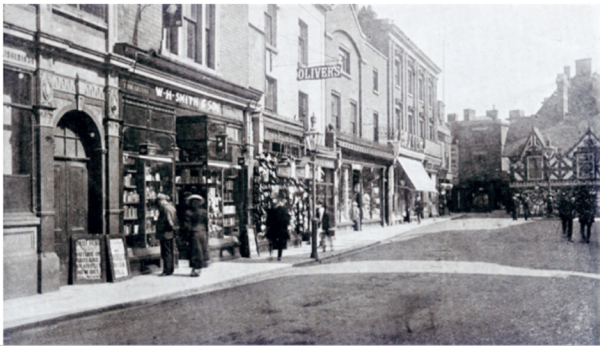 Many of our older residents will remember WH Smith being on that side of the Market Square before moving across the road and the then Midland Bank moved into the whole of the premises.

Documentation would indicate that the whole lot of the bank and associated buildings and the WH Smith shop were sold at the March 1918 auction for £9,250 to a Mr Martin Middleton Wilde of Crewe who described himself as a gentleman. Martin Middleton Wilde was however employed by the Midland Bank as a Syndic which is a person to whom potential beneficiaries to an estate of a person would apply to claim a share of the estate. Following a change of the law in 1926 a document was signed confirming that Mr Wilde had bought the properties as trustees for the Midland Bank.

Over the years, there have been several further occupants of the bank part of the building including the Ordnance Survey Offices which in the 1980’s had an address of Midland Bank Chambers, Market Square, Wellington and a music shop in the lock up shop called Fields as can be seen from the advert from the 1930’s.

By the 1960’s with the WH Smith shop still present the bank looked like this. 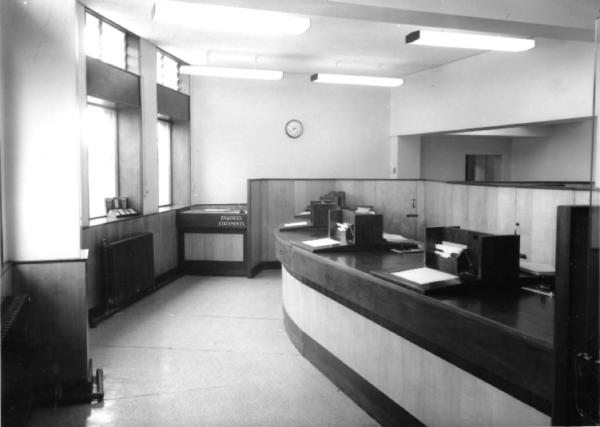 This now has our cinema but that would not be the first time that the cinema came to Station Road albeit in a somewhat quirky fashion. 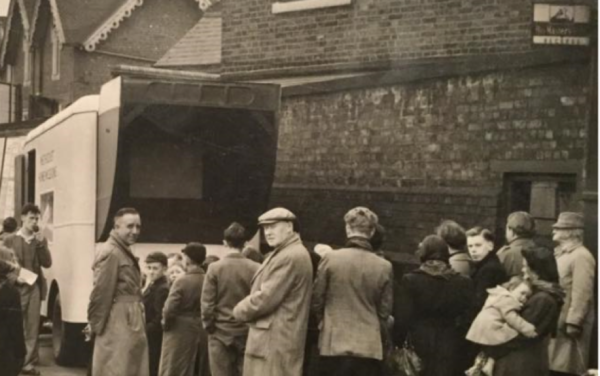 A travelling cinema was parked down Station Road at some time believed to be in the 1950’s or 1960’s. At the top right hand corner can be seen the sign for the Fields record shop and a comparison of the two photographs would show that once the record shop was closed the Midland Bank took to opportunity to improve the exterior and insert a couple of new windows.

As can be seen we are huge fans of Wellington past and heritage but are even more passionate about the town’s future and opening up a new chapter for this historic building in our town that we think the historic owners from the turn of the nineteenth century into the twentieth and before would be looking down on in approval as this building has been serving the community of Wellington in some form or another for well over 100,000 days.

The need for community pride, spirit and belonging has not diminished over time and for more information on how we can develop this building and fulfil our aim of opening up a new chapter for this to be a fabulous asset for the town for generations please contact us.

(Thanks to Allan Frost, Jim Cooper and Richard Coleman for the pictures and other information) 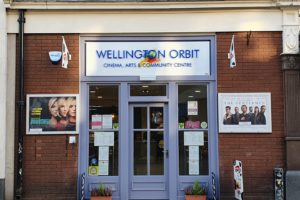 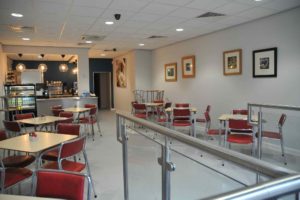 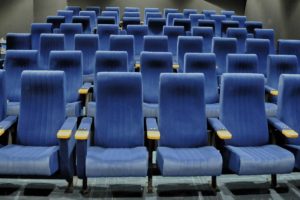