Wellington Orbit, an independent cinema in Telford, is rolling out the red carpet for the latest James Bond film, No Time To Die, starting with a 00:07am premiere on 30th September swiftly followed by Aston Martins and shaken martinis in the opening weekend.

The long-awaited Bond movie had been completed over a year ago, but the launch was delayed due to the pandemic.

‘No Time to Die’ stars Daniel Craig as famous spy James Bond and was filmed across the globe. The World Premiere is due to be held at The Albert Hall and will reach Telford on 30th September.

Cinema Manager, Damian Breeze is looking forward to finally getting the reels rolling with what will undoubtedly be the biggest movie of the year. Damian said “It’s our chance to really show why people should visit cinemas to enjoy these iconic cinematic moments. We’ve got Aston Martins, Shaken Martinis and Wellington Brass band to help launch the film.”

“We know our audience have been waiting a long time for this event, and they have told us they want it to be special.” said Damian.

Andy Smith, a Director at Wellington Orbit mentioned “What makes this show-stopping event even more special is the fact we begin screening the film on day one, the same time multiplexes begin their showings. With our tickets being even more affordable alongside our low-cost snacks and a visit from a limited-edition Aston Martin, we are hoping to attract an even more wider audience to Wellington”. 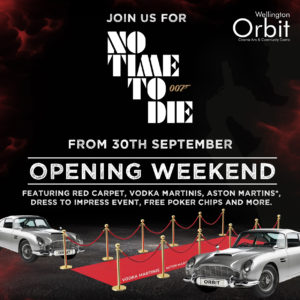 Tickets are now on sale and can be bought online at www.wellingtonorbit.co.uk/film/no-time-to-die